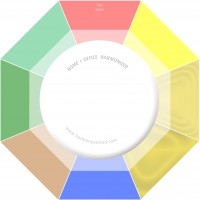 We have known for some years that one can not only neutralise these nuisances with Harmony Evolutions but also turn things completely around so that the space becomes one which revitalises. We have, in fact, "rescued" a significant number of "problem" buildings for major property owners as well as private houses.

Where things fall down in the general usage is that the placement of the Harmony Evolutions is a highly skilled task which can take several years to master. There is both a limit on the amount of time which I have available for such tasks as well as, for many, an insurmountable financial problem covering the expenses of my travelling to the problem home. On top of this, comes the cost of the Harmony Evolutions themselves and a total bill of over ₤2500.00 would be a minimal expectation.

Feng Shui is actually the name of the Chinese system of architecture and placement which has, as its central theme, the creation of harmonious and vitalising living and working spaces.

Theory said that all the different types of chaotic radiation in a given space would react with each other and thus produce a combined field of chaos. Theory further said that this field would have several points at which it would focus and permit its neutralisation with the correct technology. Classical Feng Shui suggests that the optimal point is directly over the lintel of the main entrance to the house / flat. Theory further states that neutralising the field of combined chaos would cause a reversal of the state of all the problem radiations from human inimical to vital. This we know from previous experience with the placement of standard Harmony Evolutions is correct and the space becomes an harmonious and vitalising place.

On our tour, we stayed in several hotel rooms where restful sleep would have been impossible. Project "Feng Shui" always gave us a restful night.

Further tests here in Europe have demonstrated the universal validity of the technology for any and every home and office. Not only is all inimical radiation neutralised but also a relaxing and invigorating "atmosphere" is engendered in which not only health but also relationships, business and personal development take on a new, more powerful and harmonious nature.

Production has already started and you can harmonise your entire home for a mere ₤847.00.